We’ve updated our Cellular Spectrum Guide – the latest issue is v10.0 for Q2 2019. There have been a few significant changes in the last quarter including 5G and 900MHz spectrum swaps.

5G
EE have launched their 5G service and the initial 5G cells have been deployed using a 40MHz channel in the 3400-3600MHz (N78) band. Vodafone have announced that they will be launching in July and we’ve added details of the channel that they are expected to use (although this hasn’t been officially confirmed).

As we’ve mentioned before, 5G currently works in ‘non-standalone’ mode, where each 5G base station operates under the control of an existing 4G base station. Further channels and radio bands can be expected to be added over time and, of course, new 5G-capable survey devices will be needed before anyone can actually survey any of these 5G cells.

Spectrum Swap
Traditionally, Vodafone and O2 have shared the original ‘Primary’ GSM-900 band between them – the original sharing pattern saw the operators using alternative groups of channels that gave them two sets of allocated channels each in a pattern that looked like this – VF 4.7MHz, O2 7.6MHz, VF 7.8MHz, O2 4.8MHz.

All UK networks have been engaged in a process of replacing GSM with 3G or 4G services in the 900 and 1800 bands for the past few years and the relatively narrow alternating allocations in the 900 band were seen as a barrier to the efficient reuse of that spectrum, so VF and O2, with Ofcom’s permission, agreed to swap the middle parts of the allocation.

This has led to a revised shared allocation in the P-GSM900 band that looks like this – VF 12.3MHz, O2 12.8MHz – which offers the potential to retain some GSM capacity but refarm the remainder for 3G (UMTS900) or 4G (LTE900) services.

The swap began earlier this year and RF Surveyors will already be able to notice VF cells being broadcast on channels that were previously used by O2 and vice versa. There are also new 3G and 4G channels springing up that hadn’t been used before.

Download the updated spectrum guide [pdf]. Thanks to Peter Clark of pedroc.co.uk for additional research.

As ever, if you’ve come across spectrum usage that is different or additional to the details in the guide, please let us know via enquiries@forensicanalytics.co.uk

Join our mailing list to receive news and industry updates from us and your complimentary copy of 18-page illustrated guide to Communications Data Analysis. 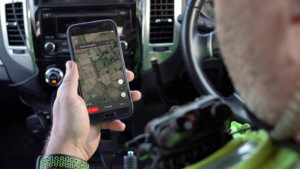 The Future of Digitisation

We are pleased to share that we took part in Executive TV’s latest programme, “The Future of Digitisation” where we spoke about our public sector

Since we have integrated geo-location identifier what3words into CSAS software, we have had in the last 30 days over 1,200 requests for the functionality and growing! Read more ow.ly/iWaF50DRaUb pic.twitter.com/AQv9s7BVdH

About 2 days ago from Forensic Analytics's Twitter via Hootsuite Inc.

We are delighted to announce that Henry Blake, Director of the “County Lines” film will be joining our panel of experts on the Tackling County Lines webinar 12th March. Register ow.ly/wViu50DDYS4 pic.twitter.com/s3o9X7mgYa

About 3 days ago from Forensic Analytics's Twitter via Hootsuite Inc.

Directed by Henry Blake, County Lines is a powerful film about the real-life nightmare of ‘county lines’ drug trafficking. hubs.ly/H0HlYY50 Now on BFI Player, as a special treat we would like to offer 5, one year subscriptions to the BFI player. hubs.ly/H0HlZ4Q0 pic.twitter.com/aycHVxTpya

About 6 days ago from Forensic Analytics's Twitter via HubSpot

Excel for LEA – Level One is recommended not only for beginners but as a refresher for experienced users. Course covers creating, editing, formatting, and printing with a strong focus on enhancing sheets with formulas, charts, and graphics. ow.ly/LyYP50DKznQ pic.twitter.com/vpH7q8YugB

Join us on 12th March to hear our expert guest speakers present a holistic consideration of the challenges and opportunities around County Lines Investigations. Sign up and see how we have been helping LEAs to fight against County Lines gangs. ow.ly/wViu50DDYS4 pic.twitter.com/BdbPNcZvTn

About 2 weeks ago from Forensic Analytics's Twitter via Hootsuite Inc.