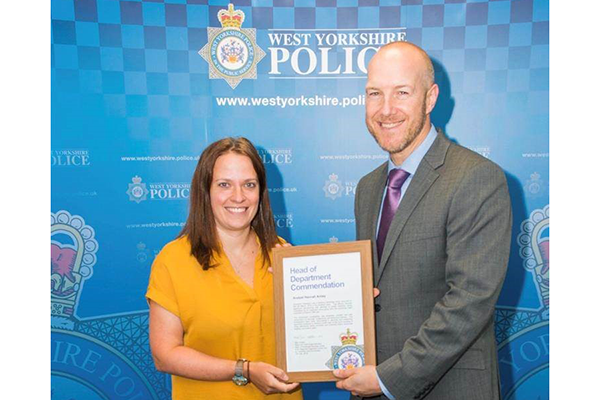 Many congratulations to our Customer Account Manager, Hannah Ainley, who has received a Commendation from her former employer.

Awarded in recognition of Hannah’s work as an Analyst for West Yorkshire Police, the Head of Department Commendation reads:

Operation Fablebank was a firearms discharge which occurred on the 19th March 2018 in the Bradford area. The offence required significant pre-planning with attempts to evade detection being undertaken by an organised crime group who had previously been convicted of firearms offences.

The subsequent investigation was extremely complex and was conducted in a thorough, professional and tenacious manner. The investigation team were instrumental in securing and preserving significant evidence to present a solid case to the court, resulting in three defendants being convicted and receiving prison sentences totalling over twenty years.

The award was presented to Hannah by Detective Chief Superintendent Nicholas Wallen, Head of Protective Services Crime & the Regional Organised Crime Unit for Yorkshire and the Humber on 10 July 2019.